file:///C:/Users/myatk/Desktop/GPA%20Calculator/FMHS_GPA_Calculator/GPS_calculator.htm
Posted by Unknown at 9:05 PM No comments:

There are a number of acceptable methodologies in the psyychometric literature for standard setting studies, also known as cutscores or passing points.  Examples include Angoff, modified-Angoff, Bookmark, Contrasting Groups, and Borderline.  The modified-Angoff approach is by far the most commonly used, yet it remains a black box to many professionals in the testing industry, especially non-psychometricians in the credentialing field.  This post hopefully provides some elucidation and demystification.  There is some flexibility in the study implementation, but this article describes a sound method.
What to Expect with the Modified-Angoff Approach
First of all, do not expect a straightforward, easy process that leads to an unassailably correct cutscore.  All standard setting methods involve some degree of subjectivity.  The goal of the methods is to reduce that objectivity as much as possible.  Some methods focus on content, others on data, while some try to meld the two.

Outcome-based education is a performance-based approach that has been defined as, 'results-

orientated thinking' (Harden and Laidlaw, 2012:37-38).
It requires:
• Learning outcomes of what is expected at the end of each phase of training to be clearly stated,
explicit and communicated;
• Decisions about the curriculum (content, educational strategies, teaching methods and
assessment) to be based on agreed learning outcomes; and
• An agreed vision that students will succeed by achieving the exit outcomes before the end of their
studies (Harden and Laidlaw, 2012:37).
Competency-based education has been defined as:
"…an approach to preparing physicians for practice that is fundamentally oriented to graduate outcome
abilities and organised around competencies derived from an analysis of societal and patient needs. It
de-emphasises time-based training and promises greater accountability, flexibility and learner-centeredness." (Frank et al., 2010:636).

As a result it may be argued that the terms 'outcome' and 'competency' – based have much in common,
with a difference in terminology a function on the geographical origin of the work.

Reflective writing is:
Ø Your response to experiences, opinions, events or new information.
Ø Your response to thoughts and feelings.
Ø A way of thinking to explore your learning.
Ø An opportunity to gain self-knowledge.
Read more »
Posted by Unknown at 7:28 PM No comments: 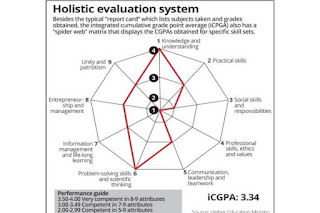 Integrated Cumulative Grade Point Average @ iCGPA
INTRODUCTION
1. Recently I had announced that beginning September 2015, five public universities will be piloting a new approach in assessing their students. This approach will be known as Integrated Cumulative Grade Point Average @ iCGPA.
2. The five public universities are UKM, UiTM, UMT, UMK and UMP. The iCGPA will be piloted in a select number of faculties of each university.
3. iCGPA is one of the initiatives under Shift 1 of the Malaysia Education Blueprint 2015-2025 (Higher Education) aka the Higher Education Blueprint which was launched in April 2015.
4. It must be noted that iCGPA as a concept has been explored since 2009 with the methodology development taking place since 2011 via collaboration between experts from public universities including UKM and UiTM. Throughout this period, the Malaysians Qualifications Agency (MQA) has provided its advice on standards, with the Ministry of Higher Education facilitating the overall process. The efforts have been time consuming in view of the data, research and efforts required to make this initiative a success.

SBA from word to moodle

SBA from WORD to MOODLE